The SOG Baton series is a revolution in multitools. This new approach makes it perfect for office and urban carry. The long slender innovative design makes these multitools better for EDC (every day carry) in the urban jungle. Full metal construction with barely any plastic makes them ultra durable. Let's take a closer look at them now. 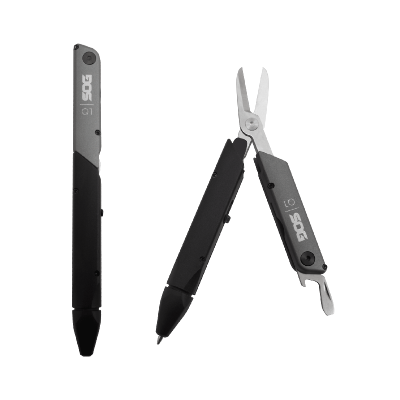 The SOG Baton Q1 is purposefully designed for office carry. At 5.6" in length it is no bigger than a marker to fit nicely in a shirt pocket. At 2.4 oz this multitool will not weigh your shirt pocket down. It will stay in place in your pocket because of the pocket clip too. It has a pressurized ball point pen, flat bladed screwdriver, cap lifter and pull apart the two ends, fold them around and there is a large pair of spring loaded scissors. This is a TSA compliant also because there is no knife blade on this multitool. 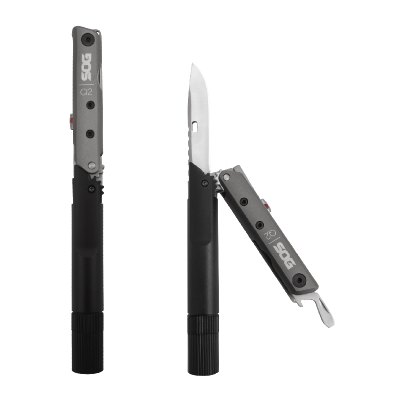 The SOG Baton Q2 is also a smaller multitool, though not as small as the Baton Q1. This little wonder is not TSA compliant because of the 2.5" 5CR15MOV blade. It also has the same screwdriver cap lifter as the Baton Q1 but on the other end has a 75 lumen twist actuated flashlight running on a AAA alkaline battery. This multitool is 6.3" long and only weighs 3 oz. This multitool will make a great back up to your EDC because it has 3 in 1, light, knife and screwdriver. 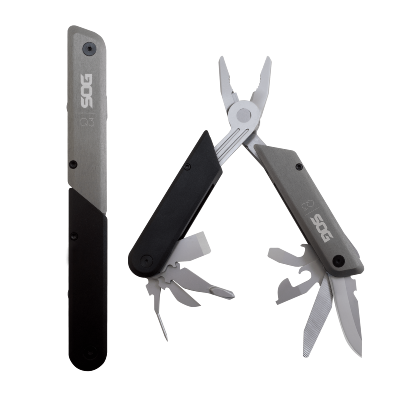 The SOG Baton Q3 is more of a traditional multitool, just in a different form factor. This multitool is shaped like a stick, allowing it to fit in smaller places. At 5.8", it is shorter than the Baton Q2 but weighs twice as much at 6 oz. Just pull the 2 halfs apart, swing them around and there is your rugged plier head with wire cutters. Going down the left side, there is a large scraper, phillips head screwdriver, awl and an eyeglass screwdriver. On the other side is a 1.75" 5CR15MOV knife blade, 3 sided file, can opener/small flat blade screwdriver, and a bottle opener/flat blade screwdriver. 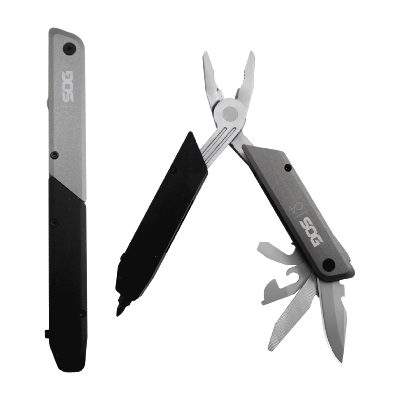 The SOG Baton Q4 is a multitool ahead of it's time. The Baton Q4 looks a lot like the Q3 just a little longer at 7" though it weighs the same at 6 oz. It pulls apart exactly like the Q3 and half of the tools are the same. Where this multitool sets itself apart is the other side. Instead of having the scraper, phillips screwdriver, awl and eyeglass screwdriver it has a reversible bit driver. There is a holder on the multitool for one double ended bit, but there is also a separate holder with 12 double ended 1/4" bits. The form factor to use this as a bit driver when folded up is perfect. The SOG Baton Q4 also has a spring loaded plier head.