Free Shipping On Orders Over $50

As the old adage goes “Cut the crap,” I have literally cut tons of crap with my  SOG Flash II. Cardboard, corrugated board, ropes and cords of various types, and a mess of other household junk. For the past two and a half years the Flash II has been my every day carry (EDC) knife of choice.

Quick on the draw, this spring-loaded knife is quite snappy. As a lover of knives, I can attest to the appeal of an audible snap when the blade locks into place. It’s comparable to that feeling you get when you hear a ding on your phone and know it’s that hot girl you met the other night.

The blade features SOG’s Hardcase Black TiNi coating over an impressive AUS-8 steel. The coating is tough and doesn’t scratch very easily at all. The coating also adds extra strength to the blade for those tougher jobs when you just don’t have the right tool.

AUS-8 steel is like the kid everyone picks on during recess. People think AUS-8 is weak, unreliable, and gives up too quickly, but having only sharpened my SOG Flash II twice in over two years is a testament to the quality and craftsmanship of this drop point blade. This is America, you can go out and drop half your paycheck on a Benchmade or Spyderco knife with high-end steel, but at about 55 bucks you won’t be in tears if you lose this knife or forget it’s in your pocket at the airport. Let’s face it, if you EDC, then you have walked blocks back to your car at a sporting event, concert or at the airport just to put away your knife you forgot you were wearing.

The aesthetic of the Flash II is not nearly as sexy as many other titanium or carbon fiber knives, but the glass-reinforced nylon (GRN) handle fits well in small-to-large size hands. Grip is vital on any knife you EDC on the job or for self-defense. The Flash II handle has a three-dimensional texture that mocks the stubbiness of a 5 0’clock shadow, so you can have confidence it won’t slip from your grip.

The handle features a small slide lock, about a fourth of the way up from the reversible pocket clip, which is rather uncomfortable to access one-handed however, to (kind of) quote Anchor Man, “100% of the time, it works every time.” I have never had the lock accidently come undone, nor have I had the blade accidently open. This level of safety ensures no harm to the user. Have you ever had a knife open in your pocket and stab your thigh through your jeans? It hurts! This isn’t going to happen with the Flash II.

Now, all EDC people have had liner lock knives, but the SOG Flash II features a unique locking mechanism known as a piston lock. When the blade in engaged, it appears to magically lock open by some form of pixie dust or unicorn poo. But, by science and engineering, the blade stays open without a liner lock to get in the way. 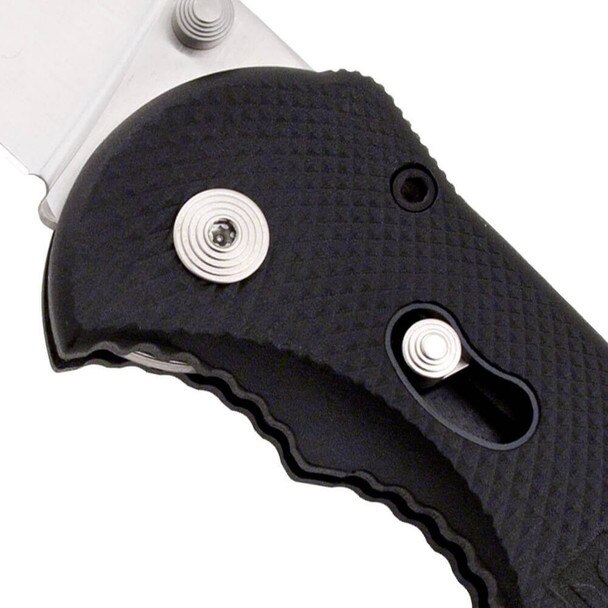 “Where’s the liner lock that I’m used too?”, an old person may ask. “How do I close this fancy-shmancy blade?”

Well, all you do is slide down the small stud-button on the side of the handle. This button quickly unlocks the blade allowing for fast closure. This motion may be tough for some users to get used to, others might get annoyed and throw their knife into the garbage disposal, but I think most of you will love this new way of closing a blade. The future is here, people.

In the winter, liner locks and gloves don’t work well together. This knife is easy to handle with gloves on, which is super important for cold-weather EDC. Also, you won’t have to worry about snow rusting this knife because the blade is so heavily coated, and the handle is nylon. 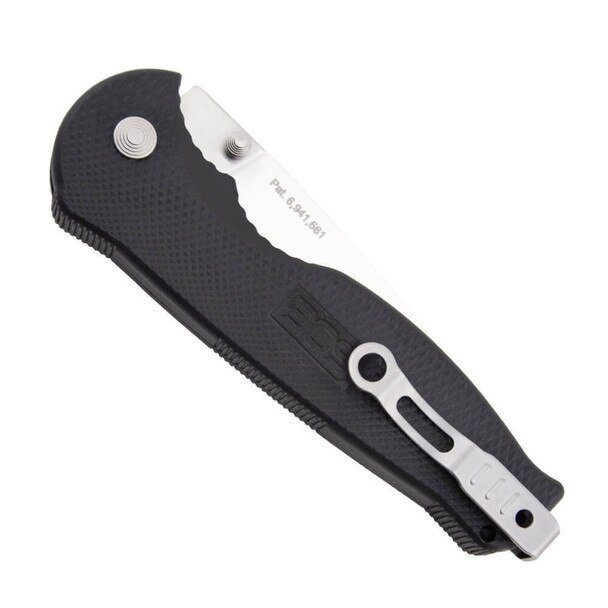 Pocket clips are very important when you get serious about your EDC. The pocket clip is reversible, but only allows for carrying tip-up. Tip-up is my preference, but that comes down to what you are most comfortable with. The SOG Flash II pocket clip allows the knife to sit right under the seam of your pocket, in complete concealment, but there is one major flaw in the design. The clip is flared out just enough that I have snagged it on tons of random stuff and had the knife pull right out of my pocket countless times. A list of things that have stolen my knife from me in this manner are as follows: Seatbelt, camera bag, fast food bag, headphone wire (thank God for Bluetooth), edges of cardboard boxes, my key ring, and my girl’s purse and boots.

I can say without a doubt, if I ever lose or break my SOG Flash II, I will be buying a replacement. I have many, more stylish, EDC knives, but the one that I keep pulling out of the drawer and throwing in my pocket each morning are the ones that prove themselves time-after-time.